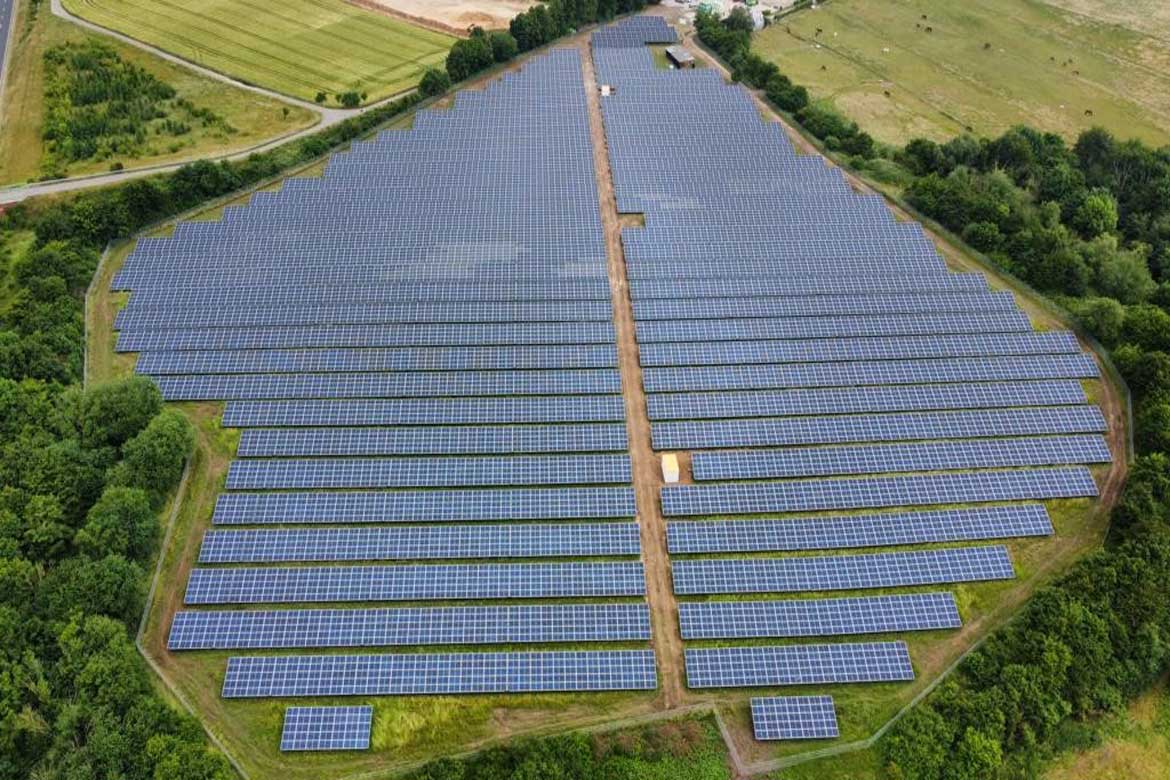 17. June 2022 By U. Eckmann Comments are Off Agri-Solar, Eco-Solar, Heinsberg

Heinsberg, 09.06.2022. Almost one year after the foundation of SUNfarming West GmbH in Heinsberg, a subsidiary of the SUNfarming Group with headquarters in Erkner near Berlin, the first 5.1 MW solar park on the site of the former gravel pit "Tagebau Wilhelm" of the Heinsberg families Quadflieg and Hensing could be connected to the grid. As a pioneer in the field of agri-voltaic systems, investor and operator of more than 350 megawatts of PV systems in its own portfolio, SUNfarming has installed innovative elements of its two product types "agri- and eco-photovoltaics" in this solar park for the first time in the Rhineland.

In this way, another subsequent use has been created on the backfilled former gravel pit, which from now on will make an important contribution to energy security in Heinsberg as well as to the reduction of climate-damaging greenhouse gases. The PV system generates regional green electricity that will supply more than 1,500 households. Sheep graze under the module tables, and a flowering meadow has been laid out on the surface to breed queen bees so that flora and fauna can develop undisturbed. In total, the plant saves about 2,000 tonnes of CO2 per year. In the future, part of the electricity will be used to balance the Alliander grid. In addition, the green electricity will be available to the people of Heinsberg as regional electricity from the local solar park. The electricity supplier lekker Energie will soon offer such a regional electricity product for electricity customers in Heinsberg.

"SUNfarming is a German medium-sized family business that develops, builds, operates and mostly finances all types of photovoltaic systems in 15 countries around the world, including classic ground-mounted, roof-mounted and landfill systems as an investor. However, our focus is on the dual use of extensively used agricultural land for our agri- and eco-PV as well as also gardening and orcharding concepts and for our animal welfare plants with suckler cow husbandry," explains Edith Brasche, member of the management board of SUNfarming West and director for international projects of SUNfarming. "In addition to climate protection and the generation of renewable energy, we are also particularly interested in ensuring agricultural use or the production of food under the facilities. Since 2014, the SUNfarming group has implemented Agri-PV concepts, also known as Food & Energy plants, in South Africa and other African countries, Turkey, Madagascar and the Dominican Republic. In Africa and Southern Europe, it has been shown that Agri-PV is able to protect plants and animals from climate-related, damaging weather conditions, such as we are unfortunately increasingly experiencing here in the Rhineland. We also want to contribute to keeping as much CO2 as possible in the soil through rewetting under the plants," says Edith Brasche.
Igor Hensing, a graduate mining engineer with many years of experience in the field of new technologies in biomass, renewable energies and green chemistry, is also a member of the management of SUNfarming West and is pleased that after almost ten years of development, the realisation of this project in Heinsberg has now succeeded: "On an area like the former Wilhelm open-cast mine, the realisation of such an innovative solar park with agricultural use and contribution to biodiversity is simply ideal. Due to the maximum fist height of 2.90 m, the plant fits in here on the site and ideally into the landscape. At the same time, almost no area was sealed," explains Igor Hensing. "Dual-use concepts such as agri- and eco-PV or solar on water could make a major contribution to achieving the internationally agreed climate targets without causing conflicts in land use. We urgently need to accelerate the expansion of renewable energies. The climate protection goals to which we as Europeans committed in Paris 2015 mean, for example, a quadrupling of solar energy production for NRW by 2030. We do not have much time! The approval procedures for renewable energies must be significantly simplified and accelerated," says Igor Hensing.
Reiner Priggen also welcomes the official start of the largest solar park of this kind in NRW, which contains agri and eco-PV elements: "According to the plans of the state government so far, the installed solar power capacity is to be almost quadrupled to 24,000 megawatts by 2030. That is why we need many such innovative dual-use projects like the one in Heinsberg as soon as possible," emphasised the Chairman of the NRW Renewable Energies Association (LEE NRW) at the inauguration ceremony.
On this occasion, Priggen called on the emerging new Düsseldorf state government of the CDU and the Greens to use photovoltaics to an "extent not yet known nationwide". "For this we need not only every private and commercial roof, but as many agri- and floating PV projects as possible, as well as open space installations on the verges of motorways and railway lines.

SUNfarming specialises primarily in large-scale systems, the occupation of conversion areas, landfill sites and with a particular focus on Agri-PV, Eco-PV and Moorland PV systems. Special quality features are the extremely durable and high-yielding glass-glass modules combined with a sophisticated irrigation system and a stable steel construction with which the modules are placed at different heights. SUNfarming has its own teams for technical development and quality control. SUNfarming's development and implementation know-how was also used, among other things, in the development and construction of the research and demonstration plant of the Jülich Research Centre and the Fraunhofer Institute as part of the BioeconomyREVIER structural change initiative at the Morschenich-Alt site near Jülich, which was completed a few months ago.

About SUNfarming:
SUNfarming was founded in 2004 by the North German entrepreneur and agricultural economist Peter Schrum and his partner Martin Tauschke in Erkner near Berlin. The family-run project developer and investor realises turnkey solar plants with a focus on agri- and eco-solar plants and is active in 15 countries around the world. As an investor, SUNfarming operates approx. 350 MW of solar power in its own portfolio and is currently working on a further 2.5 gigawatt project volume in Germany alone. SUNfarming had already developed its own quality seal for solar modules in 2007. In the company's own research and development centre in Rathenow near Berlin, SUNfarming has been researching and developing the cultivation of vegetables, medicinal herbs, fruit and wine as well as the keeping of chickens, sheep and suckler cows with calves under PV and the use of new PV technologies and agri-robots under the modules in cooperation with various universities since 2018. SUNfarming has already received several awards for its holistic commitment through the use of its "Food & Energy concepts" in combination with the production of food, the training of needy people in sustainable agriculture and the creation of jobs. SUNfarming is also a founding member of the Bundesverband Regenerative Mobilität e.V. and the non-profit development aid association Food, Education, Energy & Development e.V..