By U. Eckmann Comments are Off Food & Energy, Rathenow

Eight buildings on a total of 15,550 sqm form the new SUNfarming Food & Energy Research and Innovation Center in Rathenow in Brandenburg. 5 innovative research projects will be realized here in the coming years:

1. Biofertilizer from fermentation residues:
Development of a solar-powered process to process digestate from biogas plants and produce liquid biofertilizer

4. Aquaponics in PV plants:
Development of an energy sustainable and resource efficient aquaculture cycle system under the partially shaded areas of Agri-Solar plants

By U. Eckmann Comments are Off

For additional project development and pre-financing exclusively for German solar projects, SUNfarming has, in addition to the established financing mix, gross issue proceeds of EUR 10 million from the listed 5.5% corporate bond 2020/2025 (ISIN: DE000A254UP9). Here, SUNfarming was able to successfully place the maximum issue volume well before the end of the offer period.

Martin Tauschke, CEO of SUNfarming GmbH: “We are proud that in 2020 we were once again able to demonstrate our earning power despite the effects of the pandemic. We are just as happy about the positive start into the 2021 financial year and the successful full placement of our listed debut bond. We will do everything in our power to live up to the trust of our investors and to establish ourselves as a reliable issuer on the capital market over the long term."

SUNfarming GmbH recorded a successful 2020 financial year based on preliminary figures. SUNfarming was able to increase earnings before interest, taxes, depreciation and amortization (EBITDA) by 29.4% from EUR 1.7 million to EUR 2.2 million. This corresponds to an improved EBITDA margin of 7.9% after 4.7% in the previous year. The annual surplus increased by 87.5% from EUR 0.8 million to EUR 1.5 million. The positive development is also reflected in the equity ratio, which rose from 24.7% to 34.9%.

For the 2021 financial year, SUNfarming expects to improve both sales and earnings. In the 1st quarter, projects with an installed capacity of approx. 5 MWp and in Poland of approx. 3.9 MWp were successfully implemented. In Germany there were seven roof-top projects with a total output of 3.5 MWp and two ground-mounted systems with an output of 750 kWp each.

For the rest of the year there are currently around 27.3 MWp of new projects being planned and implemented. More than 60% of these consist of free-field PV projects that are subject to tendering with a capacity of over 750 kWp, around 20% consist of classic EEG-compensated free-field systems with an output of up to 750 kWp and around 20% roof systems with a total output of over 100 kWp. In addition to the new projects, around 29 MWp of project expansions are being implemented, of which the first two projects will be completed in the second quarter. In addition, several major projects of 20 MWp and more are in development for 2022.

By U. Eckmann Comments are Off Radloff

Gustav Radloff is not only an excellent CEO, but also a top kayaker at this year's marathon in South Africa. With this victory he qualified for the 2021 World Cup in Romania.
And as if that weren't enough, he took part in two more kayak marathons in the 45-50 and 35-50 age groups, where he came second and fourth.

The SUNfarming team warmly congratulates. We are very proud of him.

SUNfarming in Corfu – Green energy for the green island

By U. Eckmann Comments are Off Corfu

In the south of the island, in Marathias Beach, at the family hotel Villa KaliMeera, a 12 kWp SF Food & Energy Lounge was installed, which in the future will serve hotel guests on 100 m² as a shade and relaxation zone with hammocks between fruit and vegetable plants.
In the Hotel Honigtal in the north of the island, in Agios Georgios, a 13 kWp system was installed parallel to the roof, which with an annual yield of approx. 19,000 kWh completely covers the electrical energy requirements of the location.

Corfu is one of the greenest islands in Greece due to its fertile vegetation. But there is also something going on in terms of sustainability. A team from SUNfarming GmbH was able to successfully commission two photovoltaic systems on the Greek island in April 2021. The atmosfair cooperation project was actively supported by the German tour operator ReNatour and hotel manager Aias Varagoulis and his team.

The construction corresponds to a modification of the Food & Energy Training Center developed by SUNfarming, which is already operated at universities in Argentina, the Dominican Republic, the Bahamas and Turkey. The raised PV tables with a height of 2.3 m by 3.3 m are covered with bifacial double glass PV modules and the space in between is closed with a trapezoidal light band. Protection from direct sunlight and heavy rain offers the possibility of cultivating plants in arid areas and reducing water requirements. 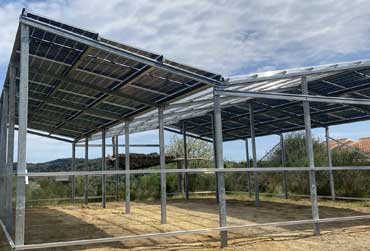 In the SF Food & Energy lounge at Villa KaliMeera, a water-saving drip hose system is being laid to irrigate tomatoes, cucumbers and other local plants, the fruits of which are available to hotel guests as a fresh snack to pick themselves.

The calculated annual energy yield is around 16,500 kWh, one third of which can be purchased directly and two thirds can be used indirectly via a net metering billing system.

The tour operator ReNatour from Nuremberg designs the trips offered as climate and resource neutral as possible and the CO2 emissions caused by the journey can also be neutralized by the guests in cooperation with atmosfair gGmbH. The non-profit climate protection organization with a focus on "travel" supports the implementation of projects with donations that effectively reduce the emission of climate-damaging greenhouse gas emissions and promote the long-term retention of carbon dioxide - including this SUNfarming project in Corfu.

What the locations were still missing in order to become more climate-neutral is the electrical energy supply through renewable energies, according to Aias. Since the inadequate use of renewable energies in Greece makes it virtually impossible to purchase green electricity from the grid, the only alternative is to produce on-site solar energy with photovoltaic systems. Thanks to the cooperation between SUNfarming and atmosfair, this goal has now been achieved and two PV systems with a total capacity of 25 kWp have been installed, which from now on take over 100% of the electrical energy supply for the hotels.

With the help of the new Greek net metering system, the energy that is not directly consumed is fed into the public power grid, registered by the network operator and drawn back from the grid as an equivalent at a later point in time as required. In this way, the seasonal operation can mathematically fall back on year-round sustainably generated energy. With this concept, the public grid functions as a gigantic virtual energy storage system and has the advantage over stationary PV storage systems of unlimited storage capacity and duration as well as the avoidance of additional investments. The fee incurred per kilowatt hour removed is a few cents and is below the specific costs per kilowatt hour stored by market-leading lithium-ion storage systems.
In this way, the existing solar potential, which in Greece is up to 1500 kWh / kWp / a at up to 150% of the German level, can be used particularly effectively and sensibly.

With this concept, SUNfarming supports climate-neutral travel in sunny holiday regions and promotes a conscious approach to the environment in the tourism industry.

By U. Eckmann Comments are Off EnergyDecentral

to EuroTier - the world's leading trade fair for animal production and to EnergyDecentral - the international trade fair for innovative energy supply -
which will take place for the first time in a digital version from February 9 to 12, 2021.

As a visitor, "EuroTier/EnergyDecentral digital" offers you an extensive technical programme and attractive opportunities for networking.

Visit us in our digital showroom on our company profile and make an appointment with us.
Please contact us to get a free ticket
e.hinojosa(at)sunfarming.de

We look forward to your participation!

SUNfarming has so far collected 7.50 million euros with a coporate bond

By U. Eckmann Comments are Off bond, Martin Tauschke

Successful 2020 with approx. 50 MW installed capacity in Germany and abroad. When it was listed on the stock exchange, it was 5.75 million euros, the bond has now raised 7.5 million euros.

The funds received are intended for additional project development and pre-financing exclusively for German solar projects.

Martin Tauschke, CEO of SUNfarming GmbH: “We are very happy about the trust that investors have in us. Especially in view of the current capital market environment, we are extremely satisfied with the fact that we were able to already successfully place around 75% of the total volume. This result speaks very clearly for our company, our strategy and the undisputed growth market of renewable energies. "
Despite the ongoing effects of the COVID-19 pandemic, SUNfarming expects 2020 to be a successful year with around 50 MWp of completed projects in Germany and abroad.
For the first half of 2021, the project pipeline already comprises more than 30 MW.

More information can be found here (in German)

SUNfarming strengthens structure and management board